The purpose of this page is to introduce the beginning welder to the equipment used in the Oxy-Acetylene welding process. This will be done starting with the cylinders and ending with the torch tip.

The use of gas welding dates back to the middle 1800’s where a mixture of Oxygen And Hydrogen were used to produce a hot flame that was used in the making of jewelry. It wasn’t until the late 1890’s when the gas Acetylene became available that gas welding developed into the process that we know today. Acetylene is a gas that is manufactured by mixing Calcium Carbide,( a by-product of the electric furnace steel making process) with water. Acetylene, when burned alone, can produce a flame temperature of about 4000 deg. F. With the addition of Oxygen a flame temperature in excess of 6000 deg. F. can be achieved, making Acetylene ideal for welding and cutting. An Oxy-Acetylene outfit is portable, less expensive and more versatile than a electric welding set up. By using the proper tips, rods and fluxes, almost any metal can be welded, heated or cut using the Oxy-Acetylene process.

There are many components that make up the Oxy-Acetylene outfit such as cylinders, regulators, hoses etc. The following is a typical outfit listing each component with a brief description of each.

Oxygen and Acetylene are stored under pressure in steel cylinders. They are sized by the cu ft of either Oxygen or Acetylene that they hold.

These cylinders contain Acetylene under pressure, are painted black, ( small “B” and “MC” tanks can be gray, silver or red ) made of steel and have cylinder valves. They range in size from 10 to almost 400 cu ft capacity. The cylinders contain a porous filler material which is wetted with acetone that allows the Acetylene to safely be contained in the cylinder at 250 psig. Always use an Acetylene cylinder in the upright position so you don’t draw any of the acetone out of the tank. Only open the cylinder valve 1 to 1 1/2 turns, leaving the valve wrench on the valve in the event it has to be shut off quickly. Acetylene should never be used at a pressure that exceeds 15 psig as it becomes highly unstable which, depending on the condition, could cause it to decompose and explode. As with the Oxygen cylinder, make sure the cylinder valve is clean before installing the regulator. 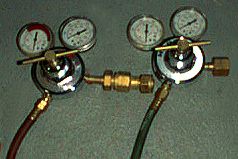 Basically, regulators work by admitting the high cylinder pressure through a valve which is operated by a flexible diaphragm. By turning the regulator adjusting knob or screw in or out causes a spring in the regulator to operate the diaphragm which opens or closes a valve in the regulator. This, in turn, regulates the outlet pressure and flow. By turning the adjusting knob in you increase the flow and pressure, out decreases the flow and pressure. Most regulators have two gauges. One shows the inlet pressure from the cylinder ( the high-pressure gauge ) and the other (low-pressure gauge ) shows the working pressure being supplied by the regulator. There are regulators that are made for heavy-duty or rough service that are not equipped with gauges, (referred to as gaugeless) and have a scale in the regulator body that is used to make pressure adjustments.

There are two general types of regulators, single stage and two stage. Both perform the same function but the two-stage regulator will supply a more constant pressure as the cylinder pressure falls by compensating for any drop in cylinder pressure better than will the single stage unit. Also, two-stage regulators are usually more heavy duty in construction and will last longer in heavy duty use and require less maintenance than the single stage units. Two-stage regulators can be identified by their second pressure chamber where single stage units have only one. Oxygen and Acetylene regulators connect differently to their cylinders so they can not be mixed up. Oxygen regulators have right-hand threads and regulators for Acetylene and other fuel gases have left-hand threads. You will notice a groove around fuel connections which indicate a left-handed thread. Finally, all outlet (low pressure ) gauges on Acetylene regulators have their gauge scales marked in red starting at 15 psig. This is to act as a reminder not to use Acetylene at pressures over 15 psig as explained in the section on Acetylene cylinders.

The cylinder regulators and torch are usually connected together by double line rubber hoses. Double line hose is known as type VD. The Oxygen line is green, the fuel line red. Hoses are available in four sizes, 3/16, 1/4, 3/8 and 1/2 inch I.D. There are different grades of double line hose used for Acetylene. They are: 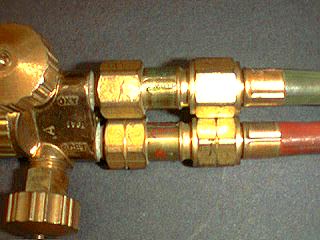 For combustion to occur, fuel and Oxygen have to mix. This should only happen in the torch mixer or the torch tip. Sometimes, due to improper operation, fuel and Oxygen could feed back into the hoses and cause combustion in the hoses or regulators. ( not good! ) Check valves when installed between the hoses and torch prevent this backflow as they close if a reverse flow starts. Check valves should be used with all torches.

The torch assembly consists of the handle, oxygen, and fuel gas valves and mixing chamber. Welding tips or a cutting attachment can be used with the handle allowing it to be used for welding, heating and cutting operations. Oxygen and fuel gas flow through tubes inside the handle which blend in the mixing chamber or tip. It is at the tip that the mixed gases are ignited. There are two basic mixer types, the equal or medium pressure type (also known as balance or positive pressure type) and the injector type. The equal pressure type is the most common and is used with fuel gas pressures that are above 1 psi. Oxygen and fuel gas enters the torch at almost equal pressures. The injector type is used when fuel gas pressures are less than 1 psi. In this type, Oxygen at high pressure pulls the fuel gas into the mixing chamber.

Proper welding gloves and goggles must be worn to provide protection when using an Oxy-Acetylene outfit. Gloves should be made for welding use. Goggles ( or face shield ) must be worn to protect the eyes from sparks and hot metal, especially when cutting metal. If you ever try to weld or cut without using goggles or a face shield, try this first. Stand in front of the outfit, close your eyes tight and adjust the regulators, that’s if you can find them !!! (point made I hope!!) The proper lens shade should be selected in order to provide the maximum amount of protection. The following chart lists the recommended shade of lens that should be used for various welding and cutting operations.

The following is a list of some safety items that should be followed when using an Oxy-Acetylene outfit.