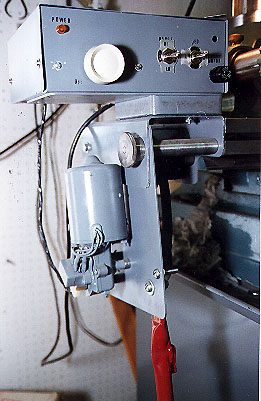 I had taken a shop course at a community college a few years ago. They let me touch a Bridgeport Mill, then made me use it! It had a power feed on the x-axis and I was suitably impressed.

When I moved to Arizona I finally spent my whiskey, tobacco, and evil women money on a mill/drill and other equipment. Of course I wanted a power table feed. Joe Rice to my rescue-specifically “Projects in Metal”, August 1994, with a great article by John Kraemer.

Mr. Kraemer utilized a windshield wiper motor and built a power supply with two voltage ranges. Naturally he used these for cutting and rapid transit. Parts sources were given so in next to no time I had an All Electronic catalog on order, made a trip to the junkyard for a wiper motor, and a trip to Radio Shack for the p/s parts. A junk yard provided a piece of 4″ square tubing. Got sort of creative cutting it off with my little 4X6 Enco saw. But it got cut.

I had a couple of dimmers laying in my parts drawer so I did not heed Mr. Kraemer’s advice to use a fan speed control. A couple of fuses later and I went to Wal-Mart and got a speed control. I don’t have an oscilloscope or I’d look into what happened. Only the 120 vac primary of the transformer was connected.

I learned a couple of interesting things. One, of course, was the use of the speed control, an other is that one of these days I will go to a different (narrower) v-belt. The one I used is very stiff and almost acts like it is not disconnected. Takes a lot of effort to turn the handwheel manually.

A third note is that a 3 bolt layout is not always 3 equidistant points! I only measured the distance between two bolts thinking they would be equal. The two fit. The third did not. That’s why they make rattail files.

I used a shorting jack to connect limit switches (if I get them). That way If the table comes against a switch I’ll flip to reverse and unplug the limit cord. I’m very happy with Mr. Kraemer’s idea and my thanks to him. Now onto a downfeed.