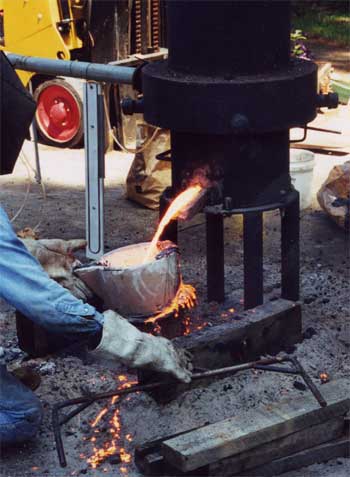 When melting aluminum, the best results are obtained when the melting is rapid. Maintaining molten heel of aluminum in the crucible speeds the melting process. If multiple charges are to be heated, it is good practice to leave 1/3 of the crucible filled with molten aluminum to reduce the thermal shock to the crucible and speed melting of the new charge. All tools, fluxes, pots, or anything that comes in contact with the molten metal must be preheated to minimize the water present on their surfaces, or in the flux. Keep the temperature of the aluminum as low as possible, only as high as needed to properly pour. Do not hold the metal at high temperatures for long periods of time. Melt quickly and pour.

The two main problems encountered when melting aluminum are dross formation and gas porosity. Both the metal charge and the furnace should be clean when melting. The crucible and tools should be cleaned of caked on dross and metal by scraping after each heat. If this material is not removed, it could slough off into later melts and become mixed with the aluminum. Charge materials should be clean and free of oxides, water or oils. Oxides absorb moisture that can cause porous castings. The best way to eliminate moisture and oils is to preheat the charge materials.

Metallic aluminum is normally covered with a thin film of oxide because the metal readily oxidizes in air at room temperature. This oxide film forms a protective barrier against further oxidation. When melting aluminum, the exposed surface of the molten metal will oxidize to form dross. This dross may float on top, sink to the bottom, or it may become mixed in the melt. If the dross is not ³wetted² by the aluminum it will float. However, if it is wetted, it may become mixed into the melt or sink to the bottom. The specific gravity (weight relative to an equal volume of water) of some of the materials found in dross are listed below.

Specific Gravity of the Components of Dross

Other factors that increase the amount of dross include the use of magnesium containing alloys in the charge material, using fine, thin or corroded scrap and high gas temperature at the melt surface. Rapid melting reduces the amount of dross formation by limiting the time the melt is exposed to the atmosphere. Melting losses are also higher with ³soaking² or holding the metal at high temperature for an extended time and when fuels are burnt with a large excess of air. An unbroken film of oxide provides protection to the melt preventing further oxidation and absorption of hydrogen. However, if the film is broken, oxidation starts again at the break.

of the aluminum to dissolve more gas. As the casting cools the ability of the aluminum to hold the gas in solution decreases and the gas forms bubbles. These appear as pinholes in finished castings. Gassy metal will often form a ³cauliflower² head at the top of the risers. Hydrogen in the aluminum melt comes primarily from water vapor. The gassing of aluminum due to water vapor is caused by the reaction:

The amount of water vapor required to affect the aluminum is so small that the amount of vapor in one cubic inch of air can ruin over 1 pound of metal.

Water vapor can come from the surface of the charge materials, oxides on the charge materials, damp flux, dirty tools and skimmers, or from the products of combustion. Hydrogen can also come from oily scrap. Fortunately most of the water vapor and oils can be removed by preheating and keeping anything that comes in contact with the metal HOT. Hydrogen can also become trapped in the surface dross. If stirred, this can gas the melt.

Aluminum reduces many oxides. If any iron oxide (rust) is present, then the reaction below occurs.

When in contact with siliceous materials, the following reaction takes place:

The silicon goes into solution, and dross is formed.

Aluminum dissolves iron. Steel is more soluble than cast iron. However, chromium steels are the most resistant to liquid aluminumıs corrosive action. The type of alloy melted also has an effect on molten aluminumıs attack on steel with zinc containing alloys being the most corrosive. Washes are used over steel tools and crucibles to prevent pick up of iron. There are several commercial washes available, however many shop-home-brews containing mica, talc or limestone and sodium silicate are also used. One such wash consists of seven pounds of powdered limestone (CaCO3) and 4oz sodium silicate mixed to a gallon of water. A warm ladle (200 deg. to 400 deg. F) is painted so that the material sets quickly, and then it is dried at red heat. One ladle wash readily available to the small foundryman is Alum-a Kote sold by Mifco. Ladle wash coatings will have to be renewed as they crack when the ladle cools.

Clean foundry practice prevents most of the gassing problems, however, there are degassing methods. Aluminum may be degassed by bubbling dry nitrogen, argon or a mixture of nitrogen and Freon, or nitrogen and chlorine or nitrogen and fluorine. Chlorine works well because it lessens the surface tension of the metal and allows the oxides to rise to the top. The best degassers make very fine bubbles that are well dispersed in the melt. These smaller bubbles do not cause much turbulence at the surface of the metal, so are less likely to stir contaminants back into the melt. This is accomplished by using a lance with fine holes or pores. Porous carbon tips are common on lances. Chorine degassing tablets are used by forcing them to the bottom of the ladle with a rod and cup. Some home foundry-men use a half teaspoon of powered ³pool shock² wrapped up in a section of aluminum foil to degas their melt (keep it dry). I have not tried pool chlorine and can not comment on itıs effectiveness. The EPA has reduced the use of straight chlorine.

Often, unless properly dried and carefully used, fluxes create more problems than they fix for the home foundryman. Degassing should not be used to remedy poor melting practice. Problems are minimal with ³clean melting practice.²

The pouring temperature of aluminum is approximately 1380 deg. F. Pouring temperature is dictated by the fluidity of the particular alloy and the type of casting. Long thin castings require higher temperatures than thick chunky castings. Some metal-casters claim to have good results with temperatures as low as 1250 deg. to 1275 deg. F. 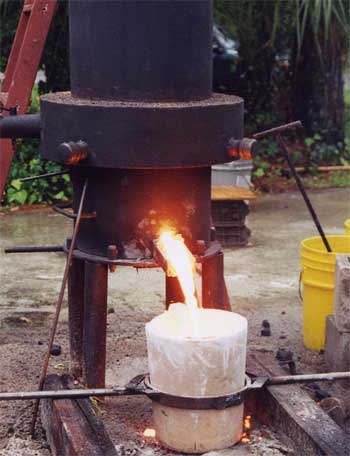 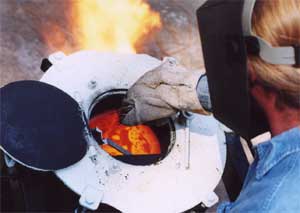 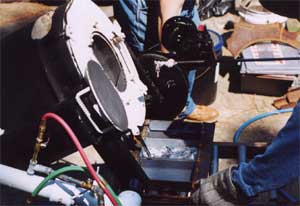