The advantage of a side draft forge is that the fire is completely out in the open. That way it is easy to see what is happening and easy to position the work in the fire. 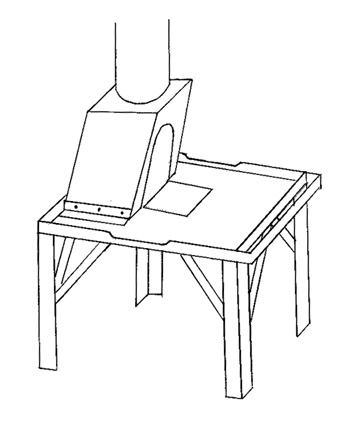 My forge is merely a “table” made from 1/4 inch plate for a top and has angle iron legs, with an angle iron rim. The table top is sufficiently reinforced underneath with flat iron welded on edge to keep the table flat. A hole is cut to accept the fire pot so that the fire pot is as close as possible to the smoke chamber. The fire pot just sits in the hole being held up by its flanges. I used a fire pot from Laurel Machine and Foundry Company, Laurel, Mississippi. 601-428-0541. Itís a good heavy fire pot with clinker breaker for about $80.00. A good value in my opinion. At the front of the forge I included a tool rack made from 1/4 x 2 flat from which tongs, poker, or whatever can be hung. Not pictured, but also included is a “third hand” to help with long pieces. This was made by welding two ears on the bottom of the forge rim on the work side. A piece of 5/8 rod is bent into a square-cornered U with 2 inch right angle bends at the top of the U. The ends of the 5/8 rod are put into a hole in each ear. A leg is made from 5/8 square stock with an eye in one end that goes around the 5/8 rod at the bottom of the U. When the U is pulled up into place, the leg hits the floor and supports it. At the back of the forge two angle irons are bolted to receive the smoke chamber. 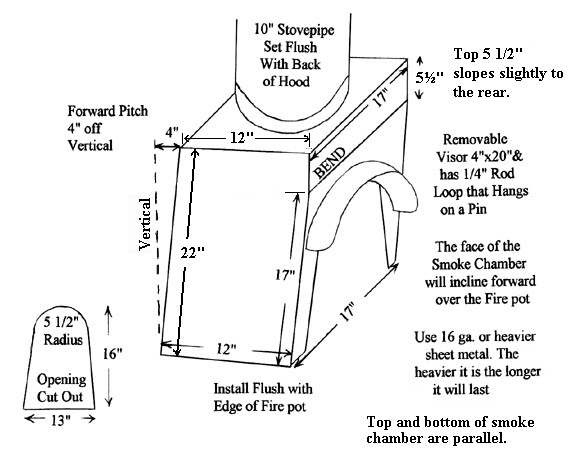 The smoke chamber is basically the same as one in a handout from Frank Turleyís Blacksmithing School. I donít know if itís his design or someone elseís, but it works very well. I have a removable visor which is rarely needed on the smoke chamber. The smoke chamber sits between and is bolted to the two angle irons bolted at the back of the forge. I have a 10 inch smoke pipe that is about 16 feet long, fitted with a chinamanís cap. It ends at about 2 feet above the peak of the shop roof. The smoke chamber draws very well and I have no problems with smoke in my shop unless a 10 x 12 foot door that is about 6 foot from my forge is open and a cross breeze blows across my fire.

A note about chimneys: