Centrifugal casting consists of producing castings by causing molten metal to solidify in  rotating  moulds.  The  speed  of  the  rotation  and  metal  pouring  rate  vary  with  the alloy and size and shape being cast. The following operations include in centrifugal casting  –  rotation  of  mold  at  a  known  speed,  pouring  the  molten  metal,  proper solidification rate, and extraction of the casting from the mold. The idea of employing centrifugal  force  to  make  castings  had  been  known  for  a  long  time,  it  was  A.  G. Eckhardt’s original patent of 1809 which revealed understanding the basic principles involved.  Centrifugal  casting  has  greater  reliability  than  static  castings.  They  are relatively free from gas and shrinkage porosity. Many times, surface treatments such as  case  carburizing,  flame  hardening  and  nitriding  have  to  be  used  when  a  wear resistant surface must be combined with a hard tough exterior surface.

One such application is bimetallic pipe consisting of two separate concentric layers of different alloys/metals bonded together.   Such pipes can be economically used  in  many  applications  and  can  be  produced  by  centrifugal  casting  process. Typically,  in  centrifugal  casting,  the  following  structure  or  zones  may  occur,  Chill Zone – This layer is of fine equiaxed structure which forms almost instantaneously at the mould wall, Columnar Zone – This is next to chill zone. It consists of directionally oriented crystals approx. perpendicular to the mould surface, Equiaxed zone – this region may occur next to columnar zone characterized by large number of uniformly grown crystals. Centrifugal casting is suitable for the production of hollow parts, such as pipes. The process is suited for producing structures with large diameters – pipes for oil, chemical industry installations and water supply, etc. 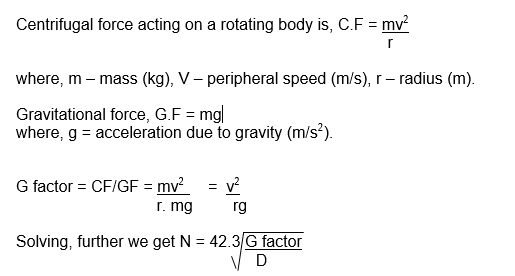 Hot  Tears  –  Hot  tears  are  developed  in  centrifugal  castings  for  which  the  highest rotation  speeds  are  used.  Longitudinal  tears  occur  when  contraction  of  casting combined with the expansion of the mould, generates hoop stresses exceeding the cohesive strength of the metal at temperatures in the solidus region.

Banding  –  Sometimes  castings  produce  zones  of  segregated  low  melting  point constituents  such  as  eutectic  phases  and  sulphide  and  oxide  inclusions.  Various theories explain this, one states vibration is the main cause of banding.

1)  The casting is relatively free from defects.
2)  Non metallic impurities which segregate toward the bore can be machined off.
3)  Less  loss  of  metal  in  tundish  compared  to  that  in  gating  and  risering  in conventional sand casting.
4)  Better mechanical properties.
5)  Production rate is high.
6)  Can be employed to manufacture bimetallic pipes.
7)  Centrifugal  casting  process  can  be  used  for  fabricating  functionally  gradient metal matrix composite material.

Bimetallic pipes can be produced by centrifugal casting by using a cheaper material in place of a highly alloyed material. This will reduce cost of the bimetallic casting. Initially outer metal is poured in the rotating mould (mould is coated with a refractory coating)  followed  by  pouring  of  second  material  with  some  time  gap.  When  the freezing  is  complete  the  tube  has  an  annular  weld  or  diffusion  zone.  The  second metal should be poured in the rotating mould after the first metal has lost fluidity. If second metal is poured earlier then the composition and thickness of second metal will be changed. Also if second metal is poured late than the first metal then there won’t be good bonding. 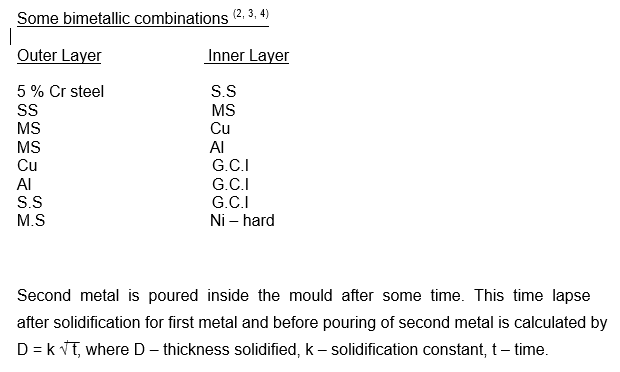